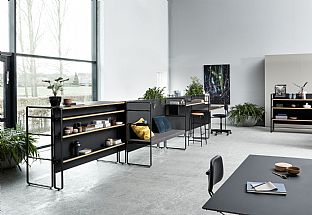 HOLMRIS B8, in collaboration with C.F. Møller Design, is launching a new series of break and zone furniture called Central Station. The new series is designed for creating zones in offices, learning environments, hotels or restaurants for optimum use of space. 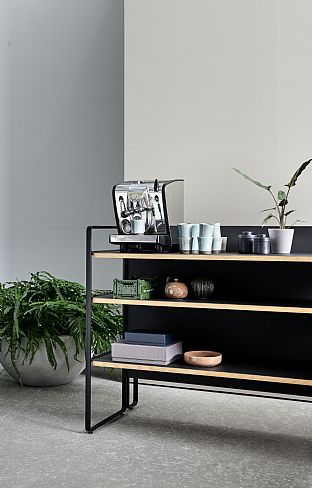 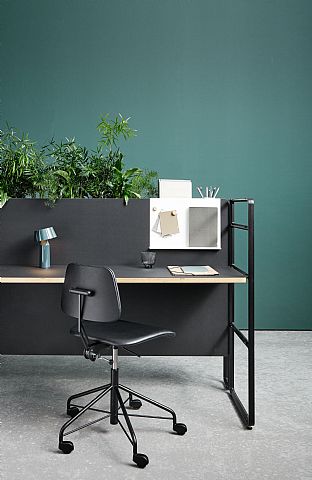 Today, traditional workspaces are often softened with lounge furniture or touch-down areas that encourage informal interaction and taking breaks throughout the workday. But how can we create cohesion between these zones in an office environment? This was the starting point when HOLMRIS B8 sat down with C.F. Møller to develop a new series of furniture.

“We want to give employees their own little spaces without disrupting the experience of the larger space,” says Henrik Holmris, CEO at HOLMRIS B8 and the driving force behind the creation of Central Station.

Nomad life interpreted as furniture
The name Central Station calls to mind images of a busy train station with crowds of people in constant movement and on the go. Just like the nomadic lifestyle, which has served as a source of inspiration in the co-creation process.

Jon Brøcker, head of department at C.F. Møller Design, explains:
“In our work, one of our inspirations was the nomads who constantly move around rather than living in one place. This mobility requires furnishings that can quickly and easily be packed away, moved and set up again. The nomad life is comparable in many ways to the modern office, which is in constant movement and must adapt to different projects and tasks. In addition, workplaces are also manned by employees of all ages who do not necessarily work in the same way. That’s why there is a need for a new type of furniture that can both embrace the company’s need for agile adaptation and support a trend in office interiors with a less distinct line between classic work zones and social zones, as well as with new types of work spaces.”

Workshop and oasis side by side
Central Station is therefore a modular furniture concept that can be combined in countless ways. With elements of varying sizes, shapes and functions, they form a dynamic, varied and spatial interior landscape with flexible and sculptural qualities.

In addition to the constant ‘on-the-go’ reference from the nomadic lifestyle, the ‘workshop’ and the ‘oasis’ also served as sources of inspiration for defining the character and functions of the series.

The workshop’s requirements for practical usability have been embodied in the design of the furniture series. The rustic, black-varnished end sections and the tabletops, which make up the basic elements of the series, are made from cast aluminium, which unites the needed functions with the simple and straightforward expression we were aiming for.

The elements in the series can be combined in a myriad of ways, without the use of tools, to create desks, conference tables and on-the-fly workstations. The tabletops and shelves can be easily moved up and down as needed. A set-up can be equipped with one or more fully upholstered benches to create a space for relaxation, informal meetings or socialising. An oasis for those small breaks where employees can recharge their batteries or come up with fresh new ideas.

“With Central Station, we’ve created a focused furniture concept that can both help divide the office landscape into zones and facilitate the diverse range of tasks, routines and changing needs of a modern workplace. We’ve put a great deal of thought into the exciting design, materials, functions and the overall look, and I think that we’ve succeeded in creating a furniture series like no other,” concludes Henrik Holmris, CEO at HOLMRIS B8.

Central Station – furniture concept
Basically, Central Station comprises end pieces that make up the core of the set-up and can be combined with tabletops in two widths, a partition and a bench. There are also a range of accessories, including whiteboards, a sorting-at-source system and storage units. The oasis inspiration is particularly evident in the series’ plant containers, which make it possible to use plants to create a healthy indoor climate and improve acoustics.

With Central Station, you can create: