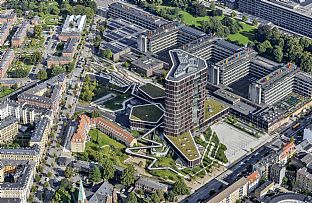 Maersk Tower has been awarded a prize by the Foreningen Hovedstadens Forskønnelse (Association for the Beautification of the Capital) for being a magnet for international research, its harmony with the surroundings and its ability to create community between people. 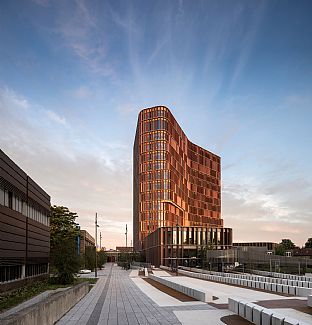 - The new 75 metre high and 42,700 square metre large Maersk Tower is in many respects a new landmark and an enrichment for Copenhagen. The tower extends Panum with state-of-the-art biomedical research facilities and raises the University of Copenhagen up into a new league as a magnet for international research. These were two of the motivations for the award included in the citation by the Foreningen Hovedstadens Forskønnelse during a ceremony at the Bygningskulturens Hus in Copenhagen, where partner and architect Mads Mandrup Hansen of C.F. Møller Architects, received the prize.

Elegant and sculptural building
Maersk Tower is from the outside characterised by its shape and copper façade,

- Architecturally, the city is beautified by the elegant and sculptural building whose organic shape and relief-like copper cladding are in harmony with the surroundings. With regard to energy efficiency, the building surpasses the legislative requirements in several areas, said the citation for the prize awarded to Maersk Tower.

Human communities
The basic architectural concept of Maersk Tower is to create conditions that give opportunities for people to enter into communities. Science, city residents and visitors from all around the world come together here. This creates an inspiring workplace that can support groundbreaking research by the Faculty of Health and Medical Sciences at the University of Copenhagen.

The success in converting ideas into architecture that works as intended is a contributory reason for the tower being awarded a prize.

- The spacious hall and canteen in the low base of the tower – the hub of the building – is open to the public, for the benefit of everyone. Around the building a new and also public, green campus park has been created, that includes the surrounding neighbourhood. This was also included in the citation for the prize and described as

a ‘floating', zig-zag shaped walkway that leads pedestrians and cyclists across the park and parts of the building and forms a new connection between Nørre Allé and Blegdamsvej.

- The main idea behind Maersk Tower – to create communities between people and create new relationships with the city – has been fully realised, concluded the citation from the Foreningen Hovedstadens Forskønnelse.

The fourth prize to be received within a short space of time
Maersk tower was taken into use by the Faculty of Health and Medical Sciences, at the University of Copenhagen after the summer of 2017 and has since received four awards within a short space of time. First of all the tower was crowned the world's best research construction during the World Architecture Festival in Berlin (Best Higher Education and Research Building), then it received a prize for the green roofs (Scandinavian Green Roof Award) created by SLA and a European Copper Award for the innovative and sculptural copper façade. Most recently it was awarded a prize by the Foreningen Hovedstadens Forskønnelse.

Maersk Tower is designed by C.F. Møller Architects. The campus park is designed by SLA. The Danish Building and Property Agency is the client and owner of the building, on behalf of the Danish State. Maersk Tower was made possible by a generous donation from A.P. Møller og Hustru Chastine Mc-Kinney Møllers Fond til almene Formaal (the A.P. Møller Foundation) and a special appropriation from the Folketing (Parliament).