Today, a new chapter begins for Copenhagen International School when the new school building in Copenhagen's Nordhavn quarter is officially inaugurated. The new school building, which is built exclusively from sustainable elements, will play a vital role in preparing its students for a global future with focus on sustainability. 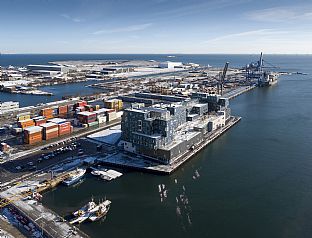 Copenhagen International School is not a new school institution. The new aspect is the 25,000 sq.m. school building in Copenhagen's Nordhavn quarter, built to house Denmark's largest international school. Today, the building will be officially opened by Princess Benedikte, Minister of Education Merete Riisager and Mayor of the City of Copenhagen Frank Jensen.

"The new building gives us the space to welcome even more Danish and international students, and we can offer modern teaching matched to the students and their age and grade levels," says Jennifer Weyburn, Director of Copenhagen International School.

"The inauguration of the new school building is an important milestone in the school's history," says Brit van Ooijen, Chair of the Board of Trustees, Copenhagen International School.

"It's seven years since we decided to move, so that we could expand our capacity and meet the demand for international schooling in Denmark. We're therefore very pleased to declare the school officially open today."

Sustainable and innovative construction
The 25,000 sq.m. school building is situated on the waterfront in Copenhagen's Nordhavn quarter, on a man-made peninsula – surrounded by the sea and coming green areas, and close to the planned new Metro station in Nordhavn that will open in a few years' time.

The building comprises four towers, stacked asymmetrically on the building's base. The four towers are designed to match the students' age and grade levels. The building's facilities include three full-size basketball courts, a theatre with space for a large audience, and adjacent rehearsal rooms.

Another unique aspect of the school building is the façade, consisting of 12,000 solar panels, covering a total area of 6,048 sq.m., making it one of the world's largest solar panel systems integrated in one building.

"We wanted to create a sustainable educational flagship in the heart of Nordhavn that in a persuasive way brings every side of the new quarter to life, using a transparent and open base and a façade that, due to its functionality and aesthetics, is an innovative landmark in the new quarter," says Mads Mandrup, architect and partner at C.F. Møller.

Ambitious school project
Ejendomsfonden Copenhagen International School, the property fund which has managed the construction project, has also been looking forward to this day. Now, they can officially hand over the building to the school and thank the business community and the foundations that have supported the project.

"We've come to the end of a major ambitious project. Besides the scale of the building and the innovative architecture, it's been a fantastic experience to be part of establishing an international school in a whole new quarter, like Nordhavn. We've been looking forward to this day and officially handing over the building to the school and would like to thank the many contributing parties that have made this new building possible," says John Bo Jacobsen, Chairman of Ejendomsfonden Copenhagen International School.

Parties behind the building