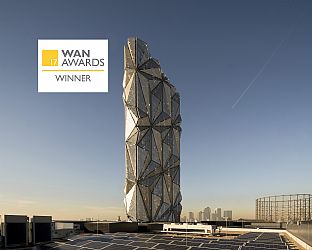 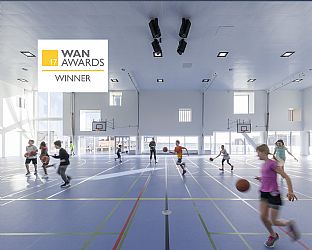 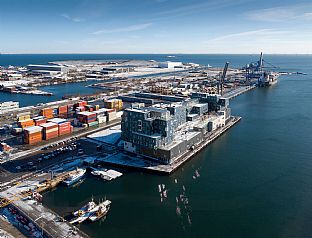 WAN (World Architecture News) Awards has for the last ten years recognised and celebrated excellence in design. This year’s 10th anniversary ceremony held at the London Marriott Hotel on Wednesday the 28th of February proved to be a successful evening for the office with a double award win. The Greenwich Peninsula Low Carbon Energy Centre in London, designed in collaboration with the British artist Conrad Shawcross, received the ‘Metal in Architecture’ Award and the Copenhagen International School received the ‘Best in Europe Education’ Award. The school was also shortlisted for the Waterfront Award on the night.

Landmark in London
The Low Carbon Energy Centre is an important new landmark for sustainable and affordable energy for one of London’s major urban development areas, The Greenwich Peninsula, including 15,700 new homes and over 300,000 m² of office space.
Guided by a desire to demystify the process of energy generation, the machine room and flexible ancillary office accommodation is supplemented with a visitor centre that offers an interactive educational experience for prearranged groups of visitors. The building footprint further allows for flexibility in adopting new energy technology over the building’s substantial lifetime.
A 49 meter tall flue enclosure is turned into a place-making statement for the gateway to the Peninsula. Designed by British artist Conrad Shawcross, the cladding for the structure is formed of hundreds of triangular panels that fold and flow across the surface of the tower forming complex geometric patterns that visually break up the flat planes to create an uneven, sculpted surface that plays with the vanishing points and perspective. At night, an integrated lighting design produces a shifting series of compositions lit from within the structure.

Solar-powered school of the future
Copenhagen international School is a new school building for Copenhagen International School, which is located on a prominent site in Copenhagen's new Nordhavn district.
The school is designed to link the school premises with the public sphere in the urban environment and give the school an open ambience. The main school building is subdivided into four smaller towers, each specially adapted to meet the needs of children at different stages of development. For example, the classrooms for the youngest pupils are particularly large: A full range of functions will take place in and around the classroom, each of which has designated green spaces and areas with drama/performance facilities, PE, etc. The towers have from five to seven storeys. All four school units are built on top of the ground-floor base, which contains common and more extrovert activities, including a foyer, sports facilities, a canteen, library and performance facilities. The common areas will be open for school and local community events. The base includes a shared roof terrace which will function as a school playground for the whole school – and as a secure environment for the youngest pupils in particular.

The school building’s unique facade is covered in 12,000 solar panels, each individually angled to create a sequin-like effect, which will supply more than half of the school's annual electricity consumption. The solar cells cover a total area of 6,048 square meters making it one of the largest building-integrated solar power plants in Denmark.