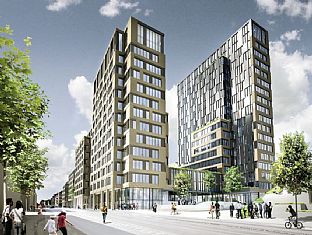 The neighbourhood of Frederiksbjerg in Aarhus is being augmented with the new, verdant urban plaza of Frederiks Plads, which will be surrounded by cafes and shopping life, residential housing and two 15-19-storey tower blocks. This is the plan for the site where the Component Workshop of Danish State Railways now lies. The plan's designers are Bricks, NCC Property Development and C.F. Møller. 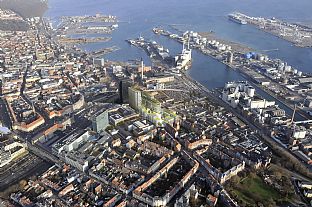 The final touches have now been added to the plans for the old industrial area that once housed the biggest employer in Aarhus: the Central Workshop of DSB, the Danish State Railways. First of all the district received Bruuns Galleri, the DGI building and Jægergården, the headquarters of the City of Aarhus. Now it is the turn of the last part of the area to be transformed. Urban plaza with housing and office buildings The planned plaza of Frederiks Plads will form a new verdant oasis in the district of Frederiksbjerg. It will act as a linchpin for the entire complex, opening up the former railway area to the rest of the city, with streets criss-crossing each other and café and shopping life at street level, offering a market atmosphere in summer and a skating rink in winter. High priority is given to create good links to the neighbouring areas, and the develoing new harbourfront. The new plaza will be surrounded by a mixture of residential and commercial buildings, the heights of which have been closely aligned with the surrounding city. The aim is to create a sculptural skyline, an architecture in harmony with the adjacent residential quarters, and to animate the streetscape through an active street frontage and public space. The project's official website was launched earlier this week, and at the end of 2015, the first commercial leases, shops and homes will be ready for occupation. 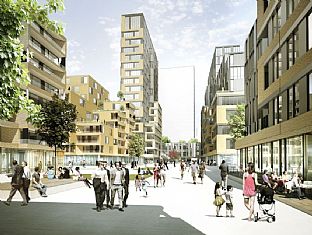