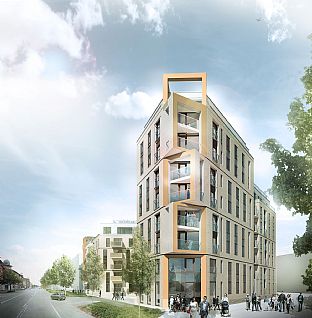 Odense's Mayor Anker Boye broke the ground for 78 new flats in the centre of Odense. 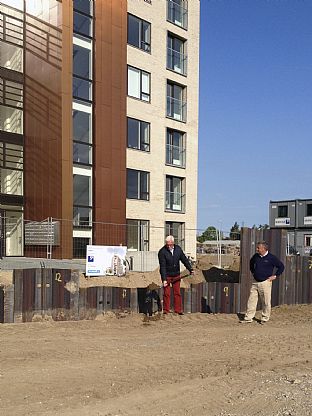 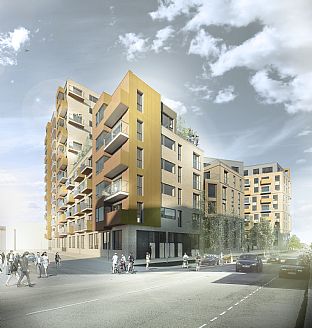 Yet another project designed by C.F. Møller is now beginning to take shape in the centre of Odense. In this case, a V-shaped building at the Karré 1 construction site near the railway station and Kongens Have in Odense. This is the second stage of the Karré 1 project, for which C.F. Møller also designed an L-shaped building, which was ready for occupation in March 2016. Anker Boye, Mayor of Odense, broke the ground for the new homes, which are being built in yellow brick and offer Odense residents new two-, three- and four-room flats close to the city centre. "We're looking forward to the new flats, which will have fantastic views, at a location just a short walk from the coming new light rail," said Anker Boye at the groundbreaking ceremony. The V-shaped building is situated with two gables towards Østre Stationsgade. This opens up the building to the south, and closes it off to the north. The building has a terraced structure, with six storeys to the west, like the southern flank of the L-shaped building, while rising to nine storeys to the east. The building's sloping façades in towards the courtyard space to the south are incised with balconies and recesses parallel to Østre Stationsgade. The façades of the yellow-brick building are divided by horizontal bands at every second floor, with framed elements as a reference to the other architecture in the area. The building's highest and most striking corner faces Odense Station and Slotsparken, as a new interpretation of the area's tower motives. In the tower, the building's many directions are combined and crystallised in a stacking of displaced, turning volumes with varying projections. The homes are being constructed by Odense Projektudviklingsselskab, OPUS. The V-shaped building will be followed by 200 more flats in the same area.

Read about the L Building here