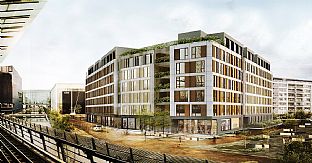 C.F. Møller and JFP are behind 252 youth residential units at Eksercerpladsen (the Parade Ground) near DR Byen in Copenhagen. A mix of homes, cafés and shops will create new life in the area. 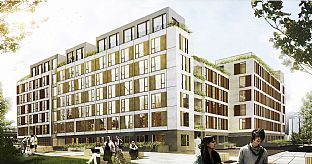 On Monday, 12 September, Lord Mayor Frank Jensen turned the first clod at Eksercerpladsen in Ørestad North. The location of the new complex gives the project a special role in the development of the urban quarter just south of DR Byen and close to the area's metro station. "With this central location, it's important that the building gives something back to Ørestad in terms of urban life. Urban life is included to a high degree, as the complex will house hundreds of students, a supermarket and two cafés. This will be a good addition to the quarter, of which the Green Block's around 170 rental homes will be completed at the end of the year, and which in just one year's time will also be populated by around 2,500 Nordea employees," states CEO Jens Kramer Mikkelsen, By & Havn, in a press release. Effect on the area Calum Ørestaden K/S is behind the construction project, which will be run by the KAB and SAB housing organisations. There will be 17,000 m² of youth residential units, with an active ground floor that will house a supermarket and two cafés. At the top of the building will be 10 penthouse flats, while the basement will house a car park. "Besides attractive new homes for young people, a key factor will be to drive new activities in the area. We hope that this location close to Emil Holms Kanal will ensure that the project can help to create a lively atmosphere in the southern part of the canal. This can have an impact on the entire area," says partner in C.F. Møller, Mads Mandrup Hansen. CEO of By & Havn, Jens Kramer Mikkelsen, is pleased that a housing project is now being established so close to the metro station. "It will be great to start up another construction project and the coming residents can look forward to the combination of the views of Amager Fælled, shopping opportunities, the major cultural and educational institutions close by, and the location right next to the metro, with the trip home from Kongens Nytorv taking just five minutes," he says. JFP A/S is responsible for the construction, as a turnkey contract, with C.F. Møller and Niras as advisers. C.F. Møller has already undertaken a large number of Denmark's striking new youth housing projects: In Odense, in 2015 the architectural practice completed the popular Campus hall of residence at the University of Southern Denmark and is currently engaged in a new project at Stenfiskerkajen close to Odense Port. For Himmerland Boligforening, C.F. Møller has received a lot of praise for the youth housing units at Henius House in Aalborg. In 2015, this project was awarded the Concrete Element Prize and the Utzon Statuette, as well as Aalborg Municipality's architectural award.