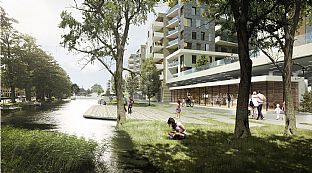 AP Pension and C.F. Møller are proud to present the coming urban development project Søtorvet in Silkeborg: an open, bright and vibrant urban landscape which combines and highlights the best in the town of Silkeborg and its wonderful surrounding countryside. 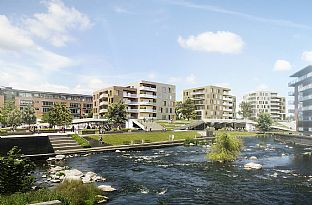 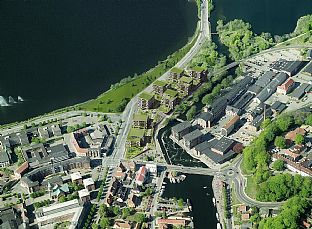 Where nature, culture and the town meet Søtorvet is the name of a new mixed urban quarter, a new urban park and a completely new urban space – interconnected by a new public recreational promenade along Remstrup Stream. The project includes facilities for a grocery store, cafés and other retail leases, and around 280 homes distributed on eight blocks of varying heights. A recurring theme throughout the project is the potential to strengthen and cultivate the relationship between nature, culture and the town in an integrated landscape and building design. The idea is thus to develop and strengthen the existing physical relations in the town, and to create new relations between all of the sights and venues in the area. In this way Søtorvet contributes to staging and narrating the area's many qualities: The restored Papirfabrik, Slotsholmen, Midtbyen's urban scene, Remstrup Stream, Langesø and not least the coming Museum Jorn. New urban space Søtorvet's architectural concept is based on a number of well-known landscape, urban and construction principles, which are all key elements of creating well-functioning and attractive urban environments, and the urban context and public profile have a 360-degree dimension, so that there is no shadow side to the project. A transverse, low base with active edge processing forms a construction profile on a human scale, connects existing paths and roads in the town, and provides natural wayfinding for pedestrians, cyclists and motorists. The base includes functions for the general public such as a grocery store, cafés and other retail leases, and car park space for the area. Raised above the base, a large green urban park will be created, shielded from the noise from Chr. d. 8´s Vej, as a peaceful public space where nature and town meet and from which the area can be viewed. The urban park and urban spaces are connected physically, spatially and visually via large landscaped amphi-stairs which form attractive recreational and gathering points along the promenade and roads. Shops, cafés and homes for everyone The homes at Søtorvet will be constructed as combined, varied blocks which form an urban environment that is exactly matched to the surrounding buildings. The blocks encircle the raised urban park, ensuring light, air and an open view across the area. At the new Søtorvet urban space, which connects the area directly to Strøget in Silkeborg, there will be retail leases for everyday commodities, etc. and along the promenade at Remstrup Stream cafés, etc. can be established. Søtorvet will have around 32,000 m2 of new construction in total. "The site's unique location – with the town and nature's assets and qualities – presents great, and very special, potential that we wish to realise, with equal elements of humility and unlimited ambition, with a unique, site-specific project that will contribute positively to Silkeborg's development as a town with international format," says Michael Kruse, architect and partner in C.F. Møller.