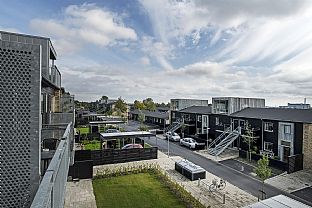 Yet another architectural award for C.F. Møller's renovation of Himmerland Boligforening's departments 19 & 22 at Aalborg's Sundparken. The recognised Swedish Architecture of Necessity prize is awarded to the project, which is highlighted as being extraordinary and important for the challenges of the future. 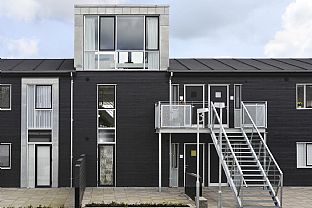 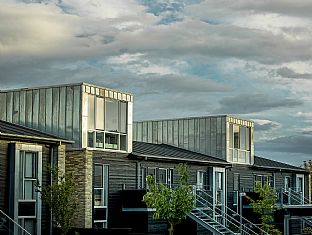 In December 2015, the renovation of Himmerland Boligforening's departments 19 & 22 at Sundparken received the Building of the Year award from the Danish construction sector. Now, yet another honour has been bestowed on this successful project to restore a residential area in a socially deprived part of Aalborg. Virserums Konsthall, one of Sweden's most recognised art venues, is behind the prestigious Architecture of Necessity prize, which in 2016 is being awarded to three projects worldwide. The prize is focused on projects that show respect for the people who are affected by them. "For a convincing example, one of few actually, of the renewal of late modern urbanism of the Swedish 'million programme' type," is the jury's motivation for choosing C.F. Møller's Sundparken project as one of the three winners. Making the ordinary extraordinary The renovation of the departments of the housing association has transformed an otherwise anonymous and worn-down residential area into a lively and socially sustainable neighbourhood. Here, the focus has been on landscape features that make it easy to find your way, and which open up front gardens to create individual identity," is how Virserums Konsthall describes the C.F. Møller project. "In a deprived area in Aalborg, Denmark, the ordinary is remade into something extraordinary and inviting human interaction. This is a type of task that will be very important in the years to come and which the jury in 2013 actually had asked for," the motivation for the award states. At C.F. Møller, head of department Søren Tortzen, responsible for the successful renovation projects undertaken by C.F. Møller in Aalborg, sees the prize as a reason for great celebration: "This is yet another big pat on the back for a project that both we and our client are very proud of. We're proud that the project has been so well received. We're especially pleased and proud of how the residents have taken back the area. They've taken ownership of the quarter to a far greater degree than before, which has contributed to giving the area a new identity," he says. C.F. Møller will receive the award during Wood Summit Småland at the end of June. The two other winners of this year's prize are the projects A Place of Respect and to Pass on Knowledge by Iredale Pedersen Hook, a house for elderly aborigines in north-western Australia, and The Wave by The Scarcity and Creativity Studio from Norway. The jury for Architecture of Necessity 2016 comprises Claes Caldenby from Stockholm's Technological University, the Estonian architecture historian Epp Lankots, Swedish Erik Stenberg from KTH Royal Institute of Technology and Danish Inge Vestergaard from the Aarhus School of Architecture.

Construction Project of the year
Director: Departments 19 & 22 have become safer
More about Sundparken