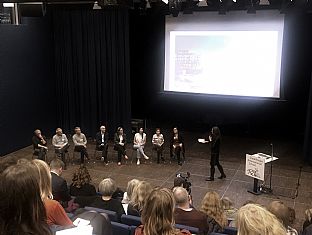 On 27th November Copenhagen International School and C.F. Møller Architects hosted a debate on the nature of future seats of learning. The panel included architects, an educational expert, a head teacher, school students and politicians. 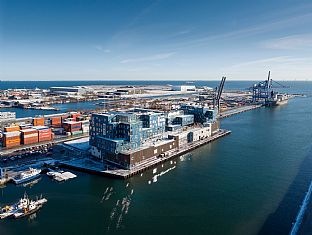 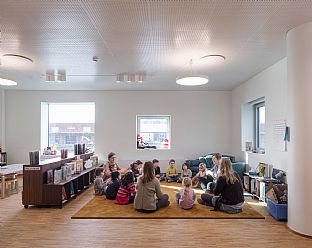 Jennifer Weyburn started out by saying how the new framework for the school has affected the institution:

“The building has been instrumental in changing us. We’re part of nature. It’s as if we’re floating on the water,” she said.

The speakers for the day included Kasper Stoltz, owner of architectural practice Rummets Sprog, who placed great emphasis on the fact that the country's schools must remember to include research when designing the schools of the future, just as the architects must remember to design on the basis of educational developments.

“It’s important to think about the design of a modern school from the inside out, not from the outside in,” said Kasper Stoltz in his presentation, and elaborated:

One of the hottest topics of the afternoon's debate was new and old schools' focus on communal spaces as opposed to classrooms.

“When new frameworks are created in schools around the country, we see a big focus on the major communal areas such as halls and canteens, but we must not forget that the majority of a student’s time is spent in the classrooms. We must remember the classrooms,” said Kasper Stoltz.

As part of the event two of Copenhagen International School's students, Anne and Leonie, were invited to present their view of the new framework for the International School. There has been a big focus on the relationship between age, education and learning spaces, and this produces positive results for the students at the school,” according to the two students.

"There has been a big focus on adapting the architecture to the different groups of children," said Leonie.

“This means we’ve got excellent learning environments. The rooms and areas for the different age groups have been adapted to age levels, and daylight conditions and the indoor climate really help enhance the learning environment. Our days are long and often intense – so that means a lot to us,” she said.

Creating fantastic conditions for future learning is one thing. Implementing that learning is another. And despite many innovative schools having emerged nationwide, one of the most discussed subjects of the debate was whether the teachers at Danish schools can adapt and deal with the new forms of learning.

“The educational approach is changing. We’ve got to get used to it. We’re moving to a completely new place, and we and the teachers must get used to this. School can be so many things, and it will develop constantly as we adjust,” said Jennifer Weyburn about the ability to get teachers to adapt to the innovative framework at Copenhagen International School.

Multifunctionality as the priority

Copenhagen's Mayor for Children and Young People, Jesper Christensen, gave the day’s visitors an overview of the huge amount of work on schools facing Copenhagen Municipality over the coming years.

“Schools must be capable of much more in the future. They must be multifunctional, be active within the local environment and contribute to urban development. They must focus on food, sport and movement. We’re in the process of developing in this area,” he said in his presentation.

“But we can’t really hit on a definitive model for what the perfect school is like. We’ve got a lot of fantastic schools, but no two are alike. There’s constant fluctuation in terms of complexity and people’s wishes – in regard to both reforms and diverse visions. We need traditional aspects, but also have to think differently,” said the mayor, Jesper Christensen.

Get schools to fit in

This very point is important in several of C.F. Møller’s school projects, including the winning project for New Islands Brygge School, which is currently under construction. This was explained by Lone Wiggers, a partner at C.F. Møller, when she presented the visions for the school.

“It’s precisely integration into the city that has been important for New Islands Brygge School. A big school has to fit into a limited space. For example, there’s no room for a playground around the building, so it has to go up on the roof. At the same time, the vision is for both the school and the roof to open up and involve the local environment, thereby giving something back to the city,” said Lone Wiggers. Lone Wiggers presented New Islands Brygge School together with Lars Wang from Copenhagen Municipality, who is the project developer. The joint presentation highlighted the collaboration regarding the school, and Lars Wang talked about how Copenhagen Municipality has involved the relevant parties in the process of achieving the best solution for the forthcoming school at Islands Brygge.

“In school projects it’s important to ensure proper involvement with the school and its users, and to give them the space to define what core values they envisage being implemented at the school in question. In this case, for example, the idea is to have a learning village in which various professional and functional areas are gathered centrally in a square. Another prerequisite for that square has been food and health,” said Lars Wang.

C.F. Møller Architects and Copenhagen International School were behind the event, which also involved a subsequent tour of the award-winning school building. The speakers and panel for the day comprised Jennifer Weyburn, Head of Copenhagen International School, Kasper Stoltz, Director of Rummets Sprog, Jesper Christensen, Copenhagen’s Mayor for Children and Young People, Lars Wang, Copenhagen Municipality, Lone Wiggers and Jørgen Juul, C.F. Møller Architects, as well as two of the school's international students, Anne and Leonie. Katrine Lotz, Director of the Royal Danish Academy of Fine Arts (KADK), wielded the baton as the moderator for the event.

New Islands Brygge School was designed by C.F. Møller Architects in collaboration with Tredje Natur, and MT Højgaard is the contractor.