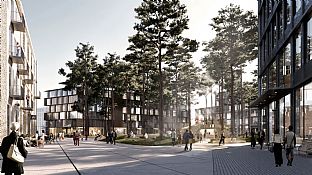 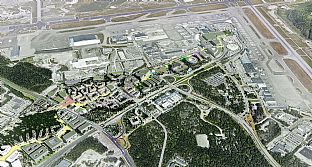 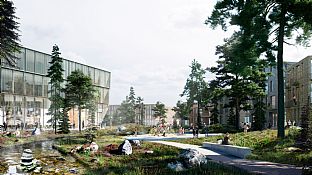 Aviapolis in Finland is a large urban district flanking the Helsinki International Airport (Airport City Aviapolis). It is a part of the municipality and the city of Vantaa. Together with Helsinki, Espoo and Kaunianen, Vantaa is a part of the greater Helsinki metropolitan area, and Vantaa is the fourth most populated city in Finland.

C.F. Møller Architects now unveil a masterplan for the Aviapolis Core Area. The Core area is located next to a railway station and the city’s ambition is for it to become the most dense, mixed and accessible area in Aviapolis. An area with urban ambience, high quality and with a strong image and identity. The starting point is that the area will be home for 1,000-2,000 inhabitants and 10,000 jobs.

- From early on, our team understood that the most urgent need for a successful development of this masterplan, was the definition of a clear and unifying vision for the whole Core area, says Danyal Taylan, Architect and Studio Manager at C.F. Møller Architects.

The team’s vision was to merge the most natural and already existing elements of nature, city and airport into “a walk-friendly airport city in nature”.

- The key tools for doing this are: enhancing the meetings between nature, connectivity, community and culture, defining the different future user groups for the programming of the future Core area, and turning every clash into a valuable future asset, Danyal Taylan explains.

Inventing 100% walk-friendly pedestrian lane
The Aviapolis Core area will run alongside the Helsinki international Airport. This area is defined by urban city functions through which a 100% walk-friendly pedestrian lane called The Strip will run through.
The Strip will start from the future terminal 3 building as an elevated pedestrian lane with urban green characteristics, hovering above the logistics of the airport´s infrastructure. This 2-level logistic division turns the Airport’s departure & arrival point into the world’s first walk or bike connection between an international airport and city functions – walk home or enjoy city functions as a short-time visitor.

The Strip lands on ground level and runs through the core area with various city functions docking on along it´s 1,8km southbound span. The Strip runs like a river through campus areas, parks, squares, commercial functions, housing and nature, connecting with public transport and easy accessibility to traffic. The Strip becomes a destination itself with its lively 24/7 urban space activated by a series of urban nodes such as a forest plaza, a campus park and a transportation hub along it´s pathway. The vision of the masterplan is to merge the existing elements of nature, city and airport into one single urban organism and to create attractive synergies between the unique mix of the user groups: visitors, residents, students, working people and artists. A green and socially sustainable pedestrian city connecting the world with Finland.

Aviapolis Core is one of several masterplanning projects that C.F. Møller Architects are currently working on in England, Denmark, Sweden, Ireland, Norway Belgium and Germany.