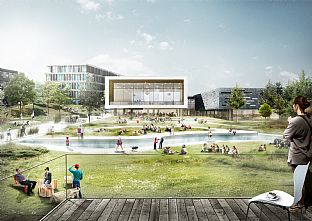 Copenhagen Business School, Frederiksberg Municipality, Metroselskabet and Realdania have announced that the C.F. Møller entry has won the contest to design the upcoming extension of CBS 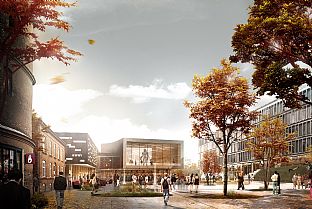 C.F. Møller and C.F. Møller Landscape, working with Transform and Moe, have won the contest to design the new urban campus for Copenhagen Business School, CBS. The project aims to create the world's best city campus. The master plan is intended to give CBS' surroundings and the Frederiksberg district of Copenhagen yet another facelift. The project creates a new and attractive campus, comprising teaching facilities, green areas, and interesting and inspiring urban spaces. "For us, this project is all about encompassing sustainability and creating integrated teaching, research and study environments in exciting combinations with external functions in the district, in terms of urban design and in the design of the new buildings, which cover an area of 31,000 m2," says Julian Weyer, partner in C.F. Møller. Heart beating for business CBS is Denmark's principal business university. At a key location in the Frederiksberg district, above both the old and new metro lines, the university will continue in the future to attract a growing number of students in Denmark. The new CBS master plan focuses on preserving and strengthening the essential qualities of the present university area, primarily expressed as a green campus with landscape features, such as the Rambla and Solbjerg Plads plaza, which forge the campus' identity, in tandem with individual buildings of high architectural quality. The design team worked systematically to create the ideal foundation for a world-class campus. "One of the visions for the new CBS is that, in terms of size and influence, the university should become a symbol for how Denmark and the Western world wishes to develop in the future. The university campus must be intelligent, compact, creative, heterogeneous, individual and have strong cohesion with the city and urban society," explains Julian Weyer. Urban intensity and inspiration The new master plan creates four different new urban spaces, ranging from the classical plaza around the metro stations to an informal, recreational park at the centre of the campus. Blue and green elements are included as parts of the climate adaptation strategy. These can potentially become recreational focal points and meeting places as well as elements that forge urban identity. "We have upgraded these elements so that they become assets rather than necessary evils," says Julian Weyer, who emphasises that the new buildings will have focus on sustainability. "One of the strategies in the master plan is that the new buildings will cover a relatively small land area to allow as much space as possible for urban spaces and urban life. Clusters of compact, multi-functional buildings with green roof areas create essentially versatile spaces where outdoor spaces converge. Both pre-existing and new buildings will be flexibly appointed so that their interiors and design expression can be changed. The buildings will be better integrated into the landscape and their diversity elegantly expressed in a holistic synthesis of buildings and landscape. Important sustainability factor C.F. Møller's master plan applies the DGNB (Green Building Council Denmark) criteria and therefore meets CBS' expectations regarding sustainability. DGNB's financial and environmental criteria are applied, for example, the project uses recreational rainwater processing methods. The project also accommodates the social criteria, explains Julian Weyer, who emphasises that the new CBS campus is for the use not only of students and university employees. "We have defined clear meeting places at every location where there is an interface with surrounding areas of the city. We have also merged traffic-related and green elements. The master plan will therefore naturally become integrated into its context and attract a wide variety of user groups. Frederiksberg's traditional role as a knowledge centre will be passed on to CBS and the university will contribute to the general development and growth of the capital city. It is important that we grasp this historical opportunity to create a unified campus, which, in terms of urban and landscape planning and architectonic value, will be comparable to universities like Oxford, Harvard, Cambridge and Aarhus," he says. Six teams were invited to compete in the first phase of the contest. The team were led by BIG, COBE, JUUL | FROST Arkitekter, Schønherr, Tegnestuen Vandkunsten and C.F. Møller. In the second decisive phase, C.F. Møller was up against COBE and Tegnestuen Vandkunsten.