An inauguration ceremony will be held on Tuesday in Stockholm for the Värtaterminalen ferry terminal designed by C.F. Møller. More than just a ferry terminal, the innovative facility combines infrastructure with urban park, providing a new recreational space for the people of Stockholm. 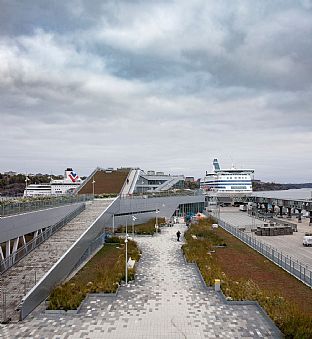 With its location and design, the ferry terminal marks the first step in the development of a brand new district in Stockholm that will innovatively integrate city and port. A landmark you can sit on top of The terminal resembles a cross between a departing ship and the surrounding area’s architecture of cranes, warehouses, etc. “The main idea was to create a vibrant urban environment at the port with a unique urban space catering to both travellers and local residents of Stockholm with a public park on the terminal’s roof. The terminal is thereby a public attraction and an efficient traffic facility where car traffic and a fluid overlap between passenger terminal and quality urban life intertwine and become one,” says Mads Mandrup, the architect in charge of design and partner in the project. The terminal and surrounding urban space are at the same level, providing easy access for all. Meanwhile, the roof of the terminal building is home to a green landscape featuring stairs, ramps, niches and seating areas, all of which invite visitors to take a walk or sit and enjoy the views of ferries, Skærgården and the city. Cohesion and durability The City of Stockholm and Ports of Stockholm issued a call for tenders in 2010 for the design and construction of a new terminal. C.F. Møller won the contract in an international competition.“It has been a great pleasure to for us to collaborate with the City of Stockholm and Ports of Stockholm. Their visions for the area are an excellent match with our way of thinking. We always think beyond the scope of the building project itself, considering the interaction and cohesion with the surroundings and the durability of solution in the big picture and long-term development of the area,” says partner and architect Mårten Leringe from C.F. Møller’s offices in Stockholm. This long-term perspective included sustainability considerations, as evidenced by the new terminal’s integrated systems powered by solar energy and geothermal heating/cooling, making Värtaterminalen self-sufficient in energy and earning the facility a Gold level environmental certification. Focus on light The inside of ferry terminal is a testament to C.F. Møller’s careful attention to daylight and pleasant indoor spaces. This focus is particularly evident in the large arrivals and departures hall. The sculptural roof of the hall draws in sunlight by day and provides stunning views of starry skies at night. Many passengers have already enjoyed these views, as ferry operations began earlier this year. On Tuesday, the terminal will open for both travellers and local residents to enjoy the facility’s restaurant, port life and landscaped roof gardens. An estimated four million people annually will pass through Värtaterminalen, travelling to and from Finland and the Baltics. Client: Ports of Stockholm Architect: C.F. Møller Landscape: Nivålandskabsarkitekter Scope: 16,000 m² and new customs facility of approximately 1,100 m²

More on Värtaterminalen
Link to images in high res